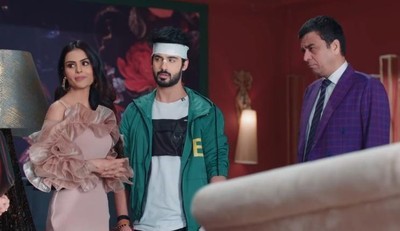 It was earlier seen that Rudrkash is banned in music industry over his video going viral defaming Balraj.

Balraj and Rudraksh are tensed over his career and so is Prisha.

Ahana and Mishka wants to see Balraj ruined but wants his entire property.

While now everyone is tensed over Rudraksh being banned and Prisha watches silently in distress.

Suddenly Keerthi marks her entry leaving Balraj Rudrkash impressed as she can remove the ban on Rudrkash.

Keerthi had earlier worked with Rudrkash in one of music video.

Keerthi promises to get rid of the ban on Rudraksh and hugs him leaving Prisha insecure.

Yeh Hai Chahatein: Rudraksh separates his ways from Prisha like never before