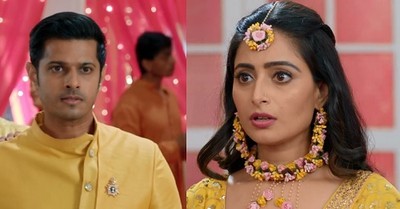 Pakhi has misunderstood Virat and now when she has decided to move on over him and is actually moving on...

Suddenly out of the blue, Virat's return stumbles Pakhi to the core.

Pakhi and Virat both face-off in the mehendi and haldi ceremony where Virat is too shocked knowing his Pakhi is Samrat's to-be wife.

Virat and Pakhi will have a showdown but this time Virat will choose to stay silent.

Virat to sacrifice his true love

Virat doesn't want to hurt his brother Samrat, who has already fallen in love with Pakhi.

Pakhi who loves Virat wants Virat to take a stand as she doesn't want to marry Samrat.

The story will deteriorate with the passing time when Virat will sacrifice his Pakhi and their true love for his brother's happiness.

However, will Virat and Pakhi be really able to move on in their life is worth to watch next in GHKKPM.

Stay tuned with serialgossip.com for more updates and latest news.

Why Virat (Neil Bhatt) to not marry Pakhi (Aishwarya Sharma)...