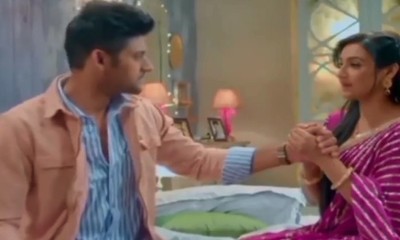 In the latest story of Star Plus TV serial Shaadi Mubarak, a new revelation will bring a u-turn in KT and Preeti's life.

KT confesses his love to Preeti when Preeti also speaks up her heart.

Preeti finally confesses her love for KT and feels blessed to have him in her life.

Preeti decides to take their marital relationship to the next step.

However, something is not right with KT and this will bring a major twist in the upcoming story.

When KT and Preeti decide to consummate their marriage, suddenly out of the blue a strange thought strikes KT.

KT to step back from Preeti's love

KT finds himself in a dilemma when his conscience tells him that he doesn't love Preeti but is still going to consummate with her.

KT falls in a tight spot and steps back from making love to Preeti when his conscience calls him that if he will still do so, then he will be a big betrayer of this world.

KT loves Preeti but somewhere his conscience is still against his feelings for Preeti as he is afraid of the past.

What will happen in KT and Preeti's love life next,

Serial Gossip is keeping you updated every minute, so make sure you check out the new updates at SERIALGOSSIP.COM