Molkki: Virendra says I Love You to Purvi with a twist (Latest News) 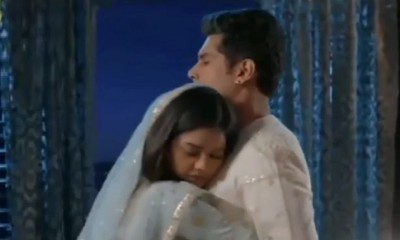 Colors popular show Molkki is seeing ups and downs in Virendra and Purvi's love life but finally love is in the air.

Virendra and Purvi are coming closer in love but when they have a cute fight, the kids misunderstand it as their serious fight.

Juhi and Manas cry and take a promise from Purvi to never leave them alone like their Mumma.

Virendra and Purvi have a lovely time together when Purvi accompanies Virendra to crack an important deal.

Purvi with her brave mind and recognizes the huge loss in the deal and saves Virendra from the loss.

Virendra is quite impressed with Purvi but the twist of love comes when Juhi and Manas compel them to teach them drama.

Virendra and Purvi are teaching Alladin drama to Juhi and Manas for their class activity when Virendra dances with Purvi.

This much isn't enough to wake up their emotions that Virendra says I Love You to Purvi surprising Purvi to the core.

Virendra surprises Purvi with his such confession.

Thereby Purvi asks Virendra to give Juhi and Manas's mother's rights to her and remove her Molkki tag.

Finally, the moment comes when Virendra hugs Purvi for the first time and the duos confess their love.

So, what will be new twist and turns in the story, to know this, make sure you check out SERIALGOSSIP.COM every minute.