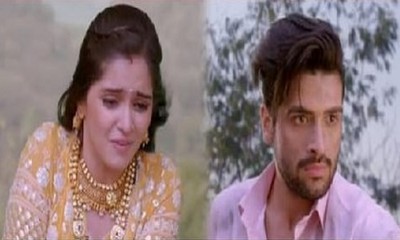 In the latest story of Molkki TV serial, suddenly Priyashi's death will ruin everything in Virendra, Purvi and Vaibhav's life.

The tragedy begins the moment Vaibhav drives crazy to get rid of Priyashi.

Vaibhav and Priyashi's car meets with an accident when Vaibhav takes Priyashi to the cliffside.

Vaibhav is turned such revengeful that he hangs Priyashi on the verge of the cliff.

Priyashi begs for life but before Vaibhav could pull her back and think of something, the car hits Vaibhav and Priyashi falls from the cliff.

Virendra and Purvi who hear Priyashi's help call on the way reach the verge of the cliff only to see Priyashi falling down from the cliff.

Vaibhav gets shocked seeing Priyashi falling from the cliff.

Vaibhav didn't plan to kill Priyashi but he only meant to scare her.

However, what will happen next in the show and will Vaibhav get jailed for Priyashi's murder.