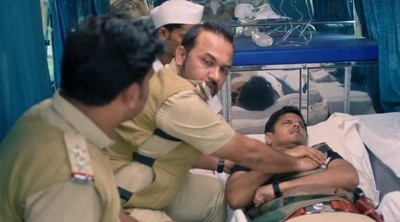 The latest episode of Star Plus Ghum Hai Kisi Ke Pyaar Mein begins with Sayi sitting to have meal with Devyani and Pulkit.

Devyani wants to feed food to her Harini too when Pulkit stops her.

As Harini is not mature enough to handle Devyani now Pulkit stops Devyani.

Pulkit asks Devyani to handle Sayi and not Harini now.

Further Pulkit and Devyani discuss only Virat when Sayi gets upset and decides to leave.

Madhuri stops Sayi and asks her to eat food and go when Sayi recalls time spent with Virat and the way she insulted Ashwini.

Mohit sends a message to Sayi about Virat being in a dangerous mission.

Sayi steps back and sits to eat food.

Sayi gulps down food and she has tears rolling out of her eyes.

Further Sayi drinks water from the jug directly where Pulkit Devyani can see pain in Sayi's eyes where she is missing Virat deeply.

Sayi returns to hostel when she sees Virat on TV and she is scared for his life.

Virat is shot where he tries to save his teammate.

Sayi calls Virat when she gets to know the shocking news and rushes to see him.