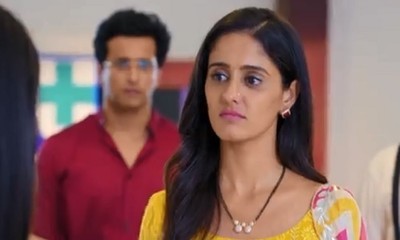 Virat and Sayi will spend a night together in the hospital.

Virat is currently hospitalized after getting shot by the terrorist.

Sayi recklessly rushes to meet Virat but Pakhi stops her.

However, Pakhi’s trick fails as Virat himself requests to meet Sayi after he regains his consciousness.

Meanwhile, when Pakhi desires to stay with Virat for the night and take care of him, Sayi leaves but Virat stops her.

Interestingly, Virat holds Sayi’s hand and stops her from leaving him.

Giving a major shock to Pakhi, Virat demands Sayi to stay with him for the night.

Where Virat and Sayi spend the night together in the hospital and Pakhi is ultimately sidelined,

This would be more interesting to watch how soon Virat will bring Sayi home.

GHKKPM: Virat requests Sayi to stay with him rejects Pakhi