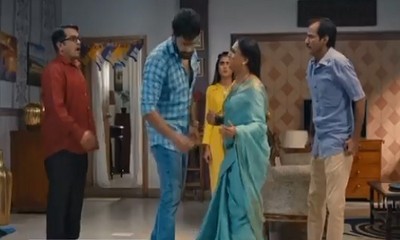 In the upcoming episode of the Star Plus TV serial, Mehndi Hai Rachne Wali will see further the situation falling for Raghav and Pallavi.

While the couple is coming closer in love, a lot is happening behind their backs.

Vijay and the Deshmukhs are not ready to tolerate Raghav in their house while Raghav is trying his best to impress them and unite them back with Pallavi.

The situation deteriorates when Vijay curses Raghav and even badmouths his parents and his upbringing.

Raghav breaks down in tears

Poor Raghav stands guilty while Sharda yells at him for crossing the line.

Sharda then falls in Raghav’s feet and requests him to leave them alone and stop troubling them.

When the Deshmukhs have ousted Raghav from the house, how will Raghav unite Pallavi with her family is worth watching next in Mehndi Hai Rachne Wali.