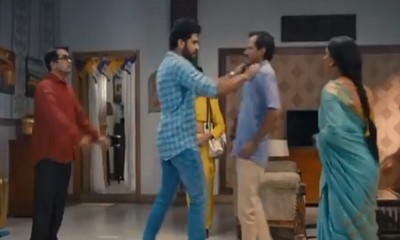 Raghav and Pallavi’s love story in the exclusive track of Star Plus TV show Mehndi Hai Rachne Wali will face new hardships ahead.

Raghav is living with the Deshmukhs to win their hearts and mend their relations with Pallavi.

However, Vijay isn’t ready to tolerate Raghav and thus he ends up cursing Raghav.

Raghav stands still when Vijay yells at him and curses him.

Unfortunately, Raghav loses his cool the moment Vijay curses his upbringing and his parents wherein the situation deteriorates.

Raghav loses all his hopes

Angry Raghav raises his hand on Vijay when furious Sharda slaps Raghav for crossing the line.

Sharda requests Raghav to leave them alone as they don’t want to suffer anymore.

Poor Raghav not only loses his last chance to win Deshmukh's hearts but he also loses the trust which Pallavi started to have in him.

How Raghav will unite Pallavi with her family within one month is interesting to watch next in Mehndi Hai Rachne Wali.