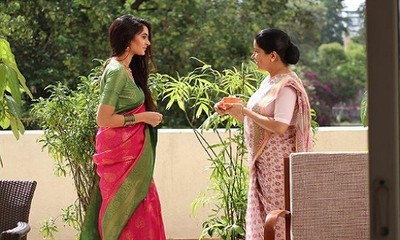 The popular TV serial Mehndi Hai Rachne Wali is looking forward for some amazing twists and turns in Raghav and Pallavi’s love life.

Raghav and Pallavi are coming closer in love where Amma is spicing up their love story.

Meanwhile, Keerti’s birthday is on the head and Amma wants to use this opportunity to bring Raghav and Pallavi closer to each other.

When Raghav is busy in his business, Amma and Pallavi come together for a coffee chat.

Amma convinces Pallavi to make all the arrangements of Keerti’s birthday as this time Raghav will be celebrating her birthday after a long time.

The twist in the tale is that Amma wants Pallavi to involve herself in Rao Family matters so that she changes her decision of leaving the house.

Raghav to be impressed with Pallavi

An exciting sequence is line up alongside this grand birthday party of Keerti.

On one side, Keerti is planning to reveal her relationship with Sunny,

Herein, Raghav is going to be impressed with Pallavi’s gestures towards his family.

What big bang will come in the birthday party is what you shouldn’t miss next in Mehndi Hai Rachne Wali.