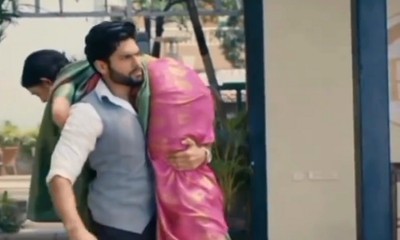 The exciting drama in Mehndi Hai Rachne Wali is gearing up to see Raghav and Pallavi’s rush to save Vijay.

Unfortunately, Vijay is accused of stealing Raghav’s most expensive necklace.

As soon as Vijay gets arrested, Pallavi recklessly rushes to save him.

Meanwhile, Raghav is also shocked to get the news.

Raghav wants to take Pallavi with him to the Police station but Pallavi refuses.

Interestingly when Pallavi stands stubborn, Raghav ties her mouth with his handkerchief and then hangs her on his shoulder to visit the Police station.

Pallavi gets stunned and compels Raghav to put her down but Raghav continues walking holding Pallavi on his shoulder.

Raghav and Pallavi have come across the new challenge wherein they have to prove Vijay innocent.

How interesting Raghav and Pallavi’s love story will be and how Raghav will prove Vijay innocent is worth watching next in Mehndi Hai Rachne Wali.