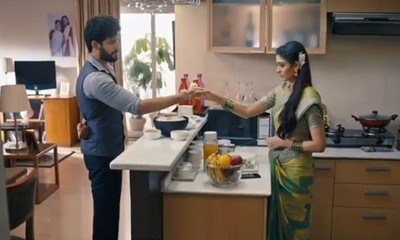 Star Plus TV serial Mehndi Hai Rachne Wali is looking forward to Raghav and Pallavi’s romance in the kitchen.

Raghav feels guilty after recalling how he hurt Pallavi by ruining the cake that she baked for him.

Pallavi understands Raghav but stays upset with him.

Raghav doesn’t want his lady love to stay upset with him anymore and thus to impress Pallavi, Raghav brings a cupcake for Pallavi.

Pallavi forgives Raghav and gets impressed with Raghav's sweet gesture.

Where soon Pallavi returns back Raghav's favor by defending him in front of her family who blames him for trapping Vijay in theft.

Pallavi's strong stand for Raghav overwhelms him and now it would be promising to watch how interesting Raghav and Pallavi's love story will be.

Make sure to follow us at SerialGossip.com, so you don't miss next updates.