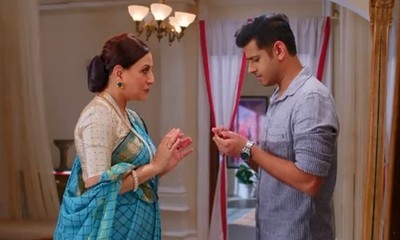 The family creates a huge ruckus of the ruby pendant which Virat gifted to Sayi.

Bhavani likes the pendant so much that she desires to have one while she also reveals that how the Guruji asked her to wear a one.

Sayi without any complaint takes out her pendant and gives the same to Bhavani shocking everyone.

Bhavani gets super happy getting the pendant but the next morning when Virat gets a new pendant for her to have Sayi’s pendant back, she reveals her annoyance.

In between this moment, Bhavani gets emotional and overwhelmed saying no matter how ill mannered Sayi is but she deserves praising.

With Virat getting pendant back for Sayi and Bhavani getting a new pendant,

Bhavani has finally started to see the good in Sayi after she selflessly gave away the pendant to her.

So, how interestingly the story will start to change now is super exciting to watch next.