Imlie: Malini gets Aditya Imlie on the rocks (Latest News) 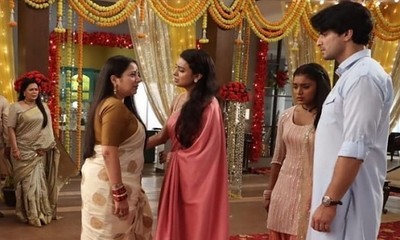 The upcoming episode of Imlie TV serial is going to witness some major twists and turns in Aditya and Imlie's marital life.

It is seen that the duos finally accept their marital relationship before the family but no one accepts this relation.

Malini who wants Aparna to understand Aditya and Imlie before taking the final decision is soon going to turn negative against them only.

The new promo is witnessing Malini and Tripathi's burst out at Imlie for trapping Aditya in her love mayajaal.

Poor Imlie faces a drastic humiliation even after Aditya is standing with her.

While the Tripathis humiliate and insult Imlie, Malini also taunts her.

This much isn’t enough that Malini compels Imlie to leave Aditya and her marital life as she now wants to be with Aditya and can’t see him with her (Imlie).

What will happen to Aditya and Imlia’s relationship which is currently on the rocks?