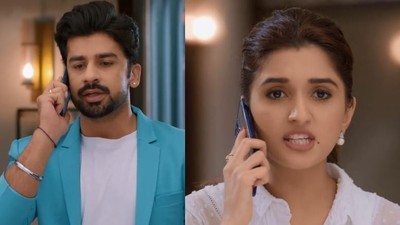 It was earlier seen that Rakhi warns Paritosh Kinjal to move out of Shah House.

However Paritosh is ready but not Kinjal.

Paritosh tries to talk to Kinjal again and again but in vain as Kinjal does not want to discuss the same.

Now Rakhi has some other plans where she calls Paritosh Kinjal for dinner.

Paritosh forces Kinjal for dinner rather being in cafe

Kinjal wanted to support Vanraj at cafe and be with him while Paritosh forces her for dinner instead of cafe.

Kinjal unwillingly agrees for the same.

This dinner date has some major trouble ahead for Paritosh and Kinjal.

Anupama: Kinjal gives new name to Kavya as Champakali The u...

Anupama: Nandini pose as Pakhi's new Bhabhi to fill sense in her mind

Anupama: Major disappointment for Vanraj with no luck in business

Anupama: Major disappointment for Vanraj with no luck in bus...