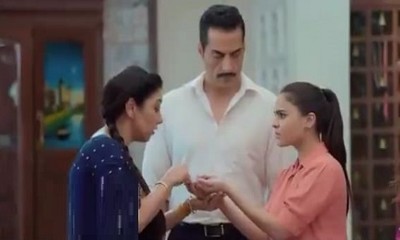 Star Plus's popular shows Anupama is looking forward to a major showdown between Anupama and Pakhi.

Meanwhile, when Vanraj and Anupama return home and come to know about the truth,

Anupama gets a huge shocker seeing how the food is wasted and how Pakhi is acting arrogant.

While Kavya brainwashes Pakhi and shows off her money compelling she will pay the money and tip to Vanraj.

This literally pisses off Anupama to such core that she gives the money and tip in Pakhi’s hand while she gives a major hit to her bringing her back on the track that she lost in Kavya’s influence.

Anupama and Pakhi at odds

Anupama and Pakhi are currently at odds and this is going to complicate their bond.

At the same time, Anupama has realized that how Pakhi is influenced by Kavya's evilness.

How Anupama will give senses to brainless Pakhi,

To know this, make sure to read the new updates at SerialGossip.com