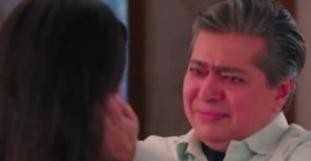 It was earlier seen that Sayi had gone away from the house for the entire day along with a huge sum of rupees 50000 in hand.

Virat worries for Sayi but she refuses to tell him the reason.

Behind Sayi's back Pakhi cooks a story of Sayi partying with her friends and taking drugs and hence she needed much money and time.

Sayi is much irked with Pakhi;s statement but she chooses to avoid her and concentrate on the planned surprise.

Sayi brings the mystery box where Ninad comes and opens the shame.

Ninad is much surprised seeing the harmonium and turns teary.

Ninad turns pink face with the happiness given by Sayi

Ninad turns pink face where he holds Sayi's face and feels proud of her.

Ninad accepts Sayi as his daughter not Bahu where Ashwini too melts seeing this vision.