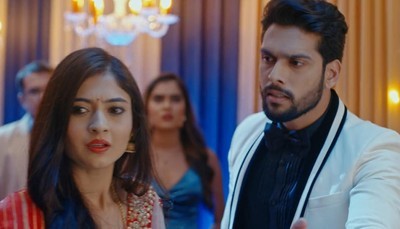 Star Plus popular show Mehndi Hai Rachne Wali is about to showcase some interesting twists and turns in the show's upcoming episode.

It was earlier seen that Pallavi fails to reach the Grand function of Raghav on time which makes him furious.

Raghav feels downhearted and he loses his sense of balance over Pallavi.

On the other hand, Pallavi tries to make Raghav understand her situation while Raghav leaves in anger.

Later, Pallavi is not allowed to enter the house as Kirti asks her to leave.

Vijay locks the door to separate Pallavi and Raghav

Raghav gets drunk and he comes to pick Pallavi up but Vijay locks the door asking Pallavi to keep her promise.

Vijay does not allow Pallavi to leave because of which Raghav loses his temper.

Besides, Farhad reaches to take Raghav back home and Mandar enjoys the show.

It will be interesting to see how Pallavi manages to win Raghav's heart back.