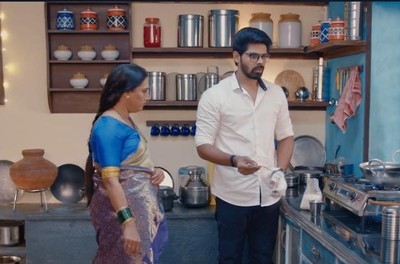 Star Plus popular show Mehndi Hai Rachne Wali is about to showcase some interesting twists and turns in the show's upcoming episode.

It was earlier seen that Mandar creates major trouble by interfering in the relationship of Pallavi and Raghav.

Mandar keeps using Pallavi to keep her away from Raghav.

On the other hand, Pallavi does not reach the Grand function of Ragahv on time, where Raghav and Pallavi get into a big argument because of Mandar.

Meanwhile, in the upcoming episode, Sharda finds out Mandar's truth about his fake memory loss.

Sharda confronts Mandar about his memory loss as she finds him in the kitchen with the sugar packet.

Sharda questions Mandar which makes him nervous about getting exposed.

On the other hand, Sharda decides to expose the truth of Mandar to everyone due to which he attempts to harm Sharda.