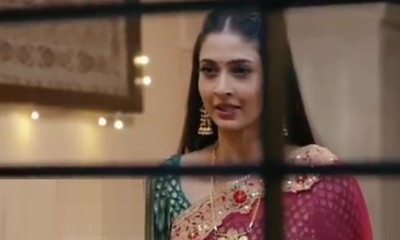 So finally the truth is exposed to Pallavi in the latest story of Mehndi Hai Rachne Wali TV serial.

Pallavi is super furious knowing how disgusting Mandar stooped that he attempted to kill Aayi.

Where Pallavi gets his shirt button on the terrace and finally tracks down his dirty hands behind Aayi's accident,

Now Pallavi is driven so crazy that she wants to ruin Mandar Deshmukh in such a way that he does not even dare to hurt someone.

Raghav already suspects Mandar and now everything is crystal clear to him after Pallavi's true revelation.

Pallavi turns fierce like lioness and takes oath before God to ruin Mandar.

So make sure you read the next update to know Pallavi and Raghav's plan against Mandar.