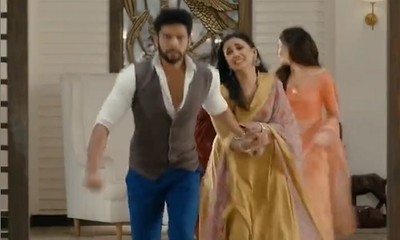 The shocking twist in the upcoming story of Mehndi Hai Rachne Wali will bring a big storm to the Rao family.

After ending Mandar's game, Raghav and Pallavi return to Rao Mansion to make their new start.

Unfortunately, the challenges aren't going to end so soon.

Sunny enters RR's mansion and demands his marriage with Keerti which ultimately pisses off everyone.

And this is where Raghav takes the drastic step and locks Keerti in the bedroom until he fixes her wedding with Subramanyam.

However, this brings no good to the Raghav family.

Sunny and Keerti love each other madly and can take any step to be together.

This brings a shocking twist as they both elope just when the Subramanyams come for the marriage alliance.

Will Raghav ever accept Sunny and Keerti's love or something tragic will happen?

Stay tuned with us to know what will happen next in the show.