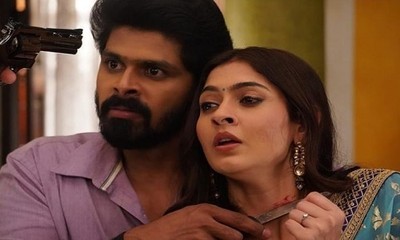 Star Plus popular TV series Mehndi Hai Rachne Wali is gearing up for the deadly climax of evil guy Mandar.

The tables are going to turn because Raghav and Pallavi get their hands on the biggest evidence against him.

The latter gets in full action mode to destroy the evidence, but it seems his plan fails.

Mandar goes so crazy in anger that he takes a drastic step of throttling Pallavi and threatening to slit her neck with the knife.

Raghav agrees to shoot himself to save Pallavi’s life but this is yet not the end.

Raghav’s final step changes the whole game and Mandar gets arrested for his deeds.

So, make sure you read the new updates at SerialGossip.com to know the next big twist post-Mandar’s exit.