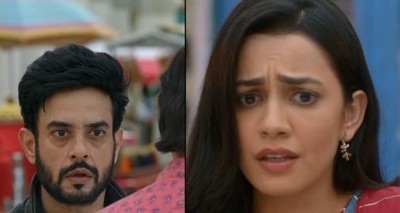 Star Plus new serial Zindagi Mere Ghar Aana will showcase an interesting track where soon Pritam's past story is going to come forth Amrita.

Pritam is a Super Cop who has hidden his real identity and is working as a Gangster to catch the illegal drug dealing racket.

In the interim Pritam and Amrita's relation gets better as Pritam starts behaving well to her.

Pritam's past is soon going to come forth before Amrita is that he has lost his child.

During his mission there was a huge danger to Pritam where he lost his child in the shoot-out.

Pritam fears of losing family stay away from them

Post that day Pritam fears and thus stay away from his family.

When Pritam meets Amrita he gets to see she is pregnant and gets connected to his child too.

Zindagi Mere Ghar Aana: Pritam turns out to be a Gangster

Zindagi Mere Ghar Aana: Pritam turns out to be a Gangster T...