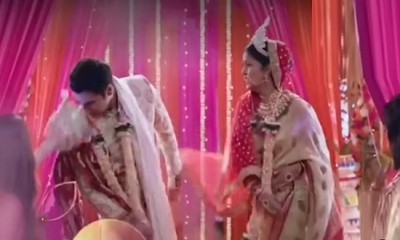 However, we never expected that Kajol’s wedding day will actually become a worst day of her life.

Kajol then blames Arjun and stands him responsible for her Baba’s (Father) death.

Kajol reminds Arjun of how he mentally pressurized her Baba and how his demands worsened his health which led to his death.

Poor Kajol breaks down and throws away Arjun’s ring as she refuses to marry him anymore.

Mukherjee’s death comes as a huge shocker to Kajol as he was the only earning man in the family and who was the backbone of the Mukherjee family.

Kajol wanders on the road losing all hopes when Anurag comes and saves her from falling on the road.

So, how Kajol and Anurag will become partners and how Kajol will fight the challenges of her life after losing her father is unmissable.