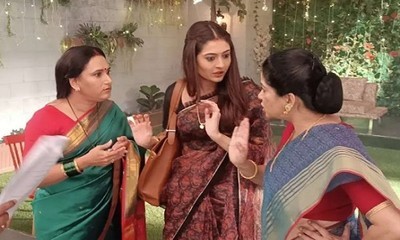 A super exciting track is about to begin next in the upcoming storyline of the Star Plus serial Mehndi Hai Rachne Wali.

Raghav and Pallavi’s Ganpati Utsav is quite challenging because the new Police Commissioner has her eye on Raghav and his diamond business.

Sunny is trying harder to get any evidence that could trap Raghav.

Meanwhile, when the situation suddenly turns against Raghav and there is no way out for him,

Thus, Pallavi gets in action mode to save her hubby.

Pallavi has her new gang of Sharda and Jaya ready to solve Raghav's problem.

Here Serial Gossip is posting the upcoming glimpse from Sharda and Jaya's hilarious fight wherein Pallavi is trying harder to calm her Aayis.

While the trios are ready to sav Raghav, let's see what will happen next in the show.