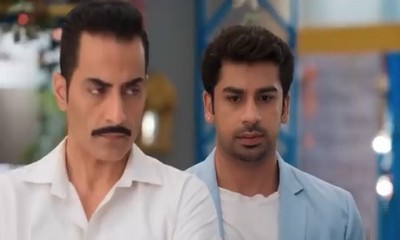 Star Plus prime-time TV serial Anupama is about to witness an intriguing showdown between Paritosh and Anuj.

Paritosh humiliates Anuj in the café and stops him from following Anupama everywhere.

Angry Anuj cancels all the deals and warns that he will not let them get any investor in the city.

This surely slips the ground under Paritosh’s feet but everything is interestingly a mere dream sequence.

Even if it’s just a dream, Paritosh is quite terrified imagining Anuj’s deadly warning and this is where he stays silent only to play big against Anuj and Anupama.

Anuj and Anupama's growing closeness is very much pricking in Paritosh's eyes but he well knows that they are nothing before Anuj.

Where Anuj can make and destroy everything, Paritosh is now up to a big game.

How Anuj will protect Anupama from Vanraj and Paritosh's blame game in the upcoming track is totally unmissable.

So, follow us at serialgossip.com to know the next big story.