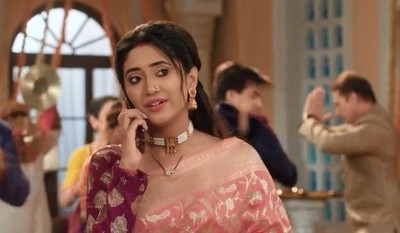 Ganesh festival is going on in Goenka house where Sirat prepares the Ganesha idol.

When she finishes her work Kairav and Vansh reach home early.

They reveal about some problem in school and hence they left them early home.

While Sirat feels suspicious of the entire story but Kartik states that kids never lie.

Next day when everyone was enjoying the festival Sirat suddenly gets call from Kairav’s school teacher who mentions about the kids not turning up in the school.

Sirat fumes in anger and scolds Kairav before all

Sirat fumes in anger where she scolds Kairav before everyone amid the function.

Sirat refuses to forgive Kairav when Kartik takes charge and takes the kids away from Sirat.

Surekha fuels up the matter stating that Sirat is not Kairav’s real mom and hence she cannot forgive him.

Let’s see what will be the conclusion of Sirat’s anger on Kairav.

Kartik (Mohsin Khan) stands up for Sirat (Shivangi Joshi) on...