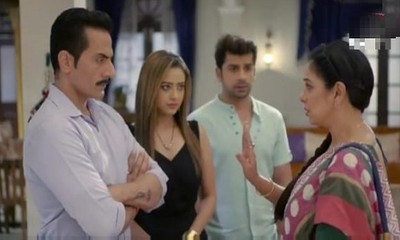 Star Plus daily soap opera Anupama is gearing up for a major twist wherein Anupama is going to take away Vanraj’s peace.

The most-awaited twist of Anupama’s exit from the Shah House is here and we don’t want you to miss it.

Anupama and Anuj’s one-night stay brings huge drama in the Shah Family when Vanraj and Baa take a dig at Anupama.

As Anupama faces her character assassination, she doesn’t let this matter pass by easily and takes a bold stand for her self-respect, and her dignity.

This doesn’t convince Vanraj as he is not ready to let Anupama leave his life and he loses his control on her.

Interestingly, the drama only spices up because when Anupama leaves the house, she doesn’t leave alone but takes Samar and Pakhi with her.

And this is what snatches Vanraj’s peace from the core.

Vanraj is already pissed off at Anupama and Anuj’s increasing proximity that now Samar and Pakhi following Anupama triggers his ego more.

Anupama is not ready to leave her kids with Vanraj and this is what slips the ground under his feet.

Let’s see how Anupama will slowly and steadily snatch Vanraj’s peace and make him go through the suffering he gave to her.