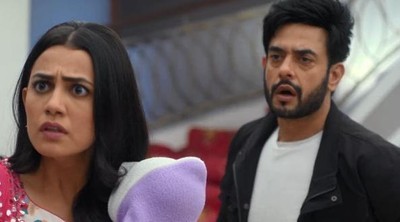 It was earlier seen that Pritam and Amrita are set for a journey to Ludhiana.

Pritam has kept a secret from Amrita where he leaves to Ludhiana as Karan Shakuja taking his identity so that he is not caught and safe with Amrita and baby.

Pritam shows his ID to Police where they feel he is Karan Shakuja.

On the other side later in Hotel room Pritam shows his ID as Karan Shakuja and fails to take it when the manager asks him to take the same.

Amrita hears the name Karan Shakuja and asks for Pritam's ID to check on the same.

Pritam fears of getting exposed before Amrita

Pritam is scared and fears how will Amrita react to see the same.

How will Pritam manage to save himself?

Will Pritam get exposed this time before Amrita?