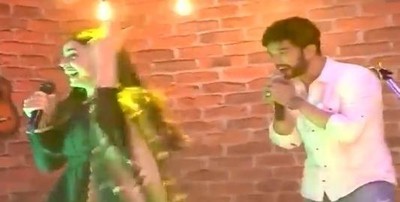 It was earlier seen that Pritam and Amrita decide to stay back in a hotel till their car is fixed.

In the meantime Amrita and Pritam comes to the restaurant to have their dinner when there is Karaoke Nights going on.

Pritam gets an invite for the same where Amrita also joins him.

In the meantime, few guys start teasing Amrita where Amrita handles them with much smartness and makes them quiet.

Amrita and Pritam have a gala time together.