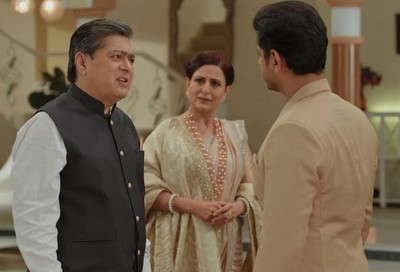 It was earlier seen that Virat is much hurt as his entire Chavhan family distrusts him to the core.

Further Ninad feels so disgusting about Virat that he declares him dead.

Ashwini also sheds tears where Virat looks at her with little hope that she trusts him.

But in vain as Ashwini wants to trust her Goodu Virat but she supports Sayi seeing her pain.

Shattered Virat decides to leave the house but Bhavani stops Virat and takes him to the house temple.

Virat looks at Bhavani with a huge shock

Bhavani gives the final ultimatum to Virat where she asks him to break all ties with Shruti and bring his wife Sayi back home.

GHKKPM: Sayi-Pulkit to operate Shruti, return of a villain

GHKKPM: Sayi-Pulkit to operate Shruti, return of a villain ...