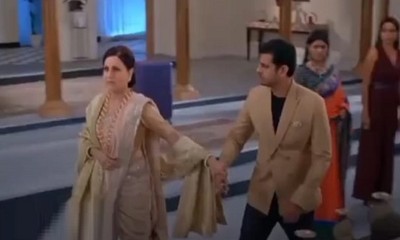 The upcoming episode of Ghum Hai Kisi Ke Pyaar Mein is about to see major twists and turns with the major face-off between Bhavani and Virat.

So, everyone has asked Virat to leave the Chavan Niwas after Sayi has left them.

However, Bhavani is against this and that's when she grabs Virat's hand only to drag him towards the temple.

There happens a major face-off when Bhavani reminds him of how she has taught him the sanskaras and how he has made their Nagesh Chavan's name with his bravery.

And now comes the major twist when Bhavani interestingly asks Virat to cut off all his ties with Shruti and bring Sayi back to home.

As per our last update, Bhavani finally takes a strong stand for Sayi and compels Virat to break all relations with Shruti.

Where everyone is quite stunned at Bhavani's demand,

Now, let's see how Bhavani will bring Virat and Sayi together again?

Make sure to read the new updates at serialgossip.com