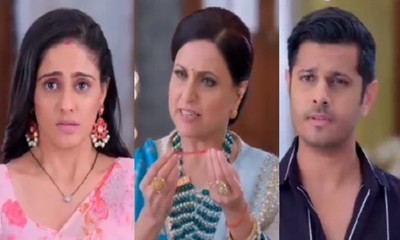 Star Plus daily TV serial Ghum Hai Kisi Ke Pyaar Mein (GHKKPM) is gearing up for major ups and downs next in the upcoming storyline wherein Virat and Sayi are having quite a tiff with Bhavani.

Bhavani is unable to cope with Virat’s lies for Sayi and thus she furiously slaps him for breaking her trust once again.

Therefore, the situation messes up when Bhavani refuses to let Sayi practice internship, and thus Virat then puts a shocking condition before her.

And here he asks her to give him a separate space a separate house if she doesn’t want Sayi to continue her career.

Eventually, this shakes everyone to the core.

Virat and Sayi’s major move next

So, further, in the story, you will see Virat and Sayi taking their major move next against Bhavani.

It would be highly intensified to watch if she will ever permit Sayi or not and will Virat really leave the Chavan Niwas?

Trouble ahead for Sayi once again in Ghum Hai Kisi Ke Pyaar ...

GHKKPM: Virat accusees Bhavani of blackmailing Sayi on their...