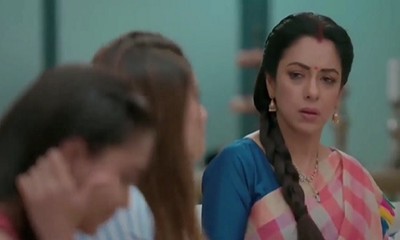 In the upcoming story of Star Plus serial Anupama, a lot is going to change in Anupama's life with Pakhi's growing intimacy with Barkha's brother Adhik.

The story takes a U-turn when Vanraj stops Anupama and tries to make her understand but the latter still brings Pakhi to the Kapadia Sadan.

However, soon she realizes Vanraj's point when she herself notices Adhik and Pakhi's eye lock moment.

Thus, Anupama decides to control the situation before it takes a toll on her family.

And therefore, this leads to a big twist in the show when Anupama confronts Pakhi.

So, further in the episode, you will see Anupama taking a drastic move to block Adhik and Pakhi's affair.

However, Pakhi like rebellious girl will even agree to Anupama's condition?

What do you think will Anupama do to save naive Pakhi from Adhik's love game?

Anupama: Kinjal's baby dies on the spot she is very critical

Anupama: Kinjal's baby dies on the spot she is very critical...