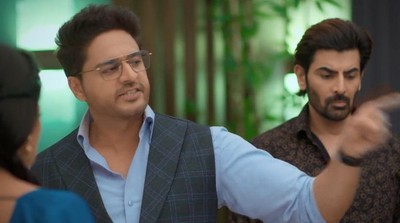 A whole lot of fun drama excitement in the next track of Star Plus Anupama.

It was earlier seen that Barkha pushes Kinjal which leads to her fall on her stomach.

OMG the fall was a dangerous one but at the same time Kinjal has a family blessing and Lord Krishna with her which leads to her safety.

Fortunately, nothing has happened Kinjal and her baby is also safe.

But the drama Vanraj comes and creates in Shah House is not at all digested by Kapadia family.

Anuj gets against Anupama happy Barkha

Anuj hates Vanraj for his Tamasha where Barkha also dislikes him and wants to stop his entry in the show.

This time Anuj gets against Anupama and supports Barkha Bhabhi leaving her shocked and happy.

So we can say that Barkha's master plan is successful where Anuj and Anupama are on a separate page this time.

Let's what happens next ahead in the show Anupama.