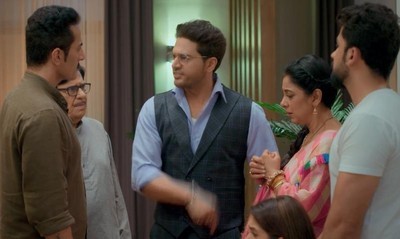 Ohh now here we get to see some spice in the storyline.

All this while we were bored with Star Plus serial Anupama where loyal viewers were also unhappy with the ongoing drama in the show.

So now the drama is back on track.

We saw the concerned Vanraj who was much distressed and tensed for Kinjal and his grandchild.

Vanraj comes to Kapadia House and scolds Anupama for her mistake where Anupama is only Sorry Sorry and Sorry.

At the same time, Anupama is much guilty of the accident which happened and she does not argue with Vanraj this time accepting her mistake.

Anupama cannot afford loss to her grand child or any harm to Kinjal.

But Anuj is against Vanraj's Tamasha and asks Anupama to right away drop Kinjal back home and keep away from Shah family and Vanraj.

Anupama does not agree with Anuj this time and resists an attack against Vanraj where Anuj feels offended this time.

Let's see what happens next on the show.