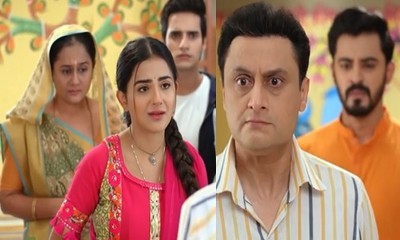 In the daily popular TV serial Mithai, finally the truth will come out.

Mithai was already suspicious of Girish and Shubham's conspiracy behind this wedding that now she plays a trick.

Mithai talks about a ritual wherein her to-be husband aka Shubham has to fill vermillion in her hairline before the wedding.

Interestingly, Girish falls to this trick and thus he pulls Shubham when he almost fills the sindoor.

And that's when Mithai finally exposes the truth as Girish yells out about how he planned to make Shubham leave Mithai in mandap only to defame her.

Now, this huge revelation proves a drastic hit to Siddharth who never expected such cheap trick from Girish and Shubham.

Mithai surely chose her self-respect over Dadu's demand of marriage,

But will Sid let her leave the Choubey house?

Let's see what happens next. Keep up with us at serialgossip.com for more.