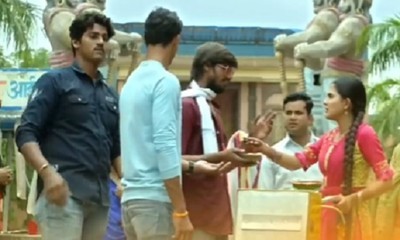 The popular Hindi Zee TV serial Mithai is now all set for a big U-turn in Sid and Mithai’s destined love story.

Shubham and Mithai’s wedding rituals begin when the latter decides to continue her mithai selling business.

Therefore, now when Mithai takes her cycle and thus starts selling the jalebi on the roads, Sid also comes to help her.

Sid wants to make sure that Mithai stays safe when going outside, thus he follows her.

However, when an evil gang of goons buys jalebi from Mithai but also insults her, Mithai fiercely gives it back to him.

But this fight doesn’t end here but gets intense.

Sid surely saves Mithai this time but he doesn’t want her to risk her life anymore.

Therefore, when Sid acts quite protective toward her, this totally surprises Mithai.

And now in the upcoming track, it would be highly intensified to watch how Sid and Mithai will come closer and eventually get married.

Keep up with us at serialgossip.com to get the latest updates.