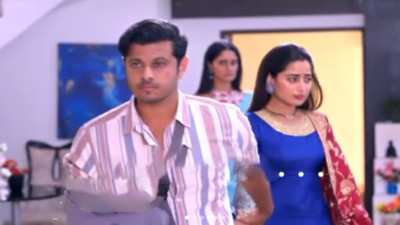 In Ghum Hai Kisike Pyaar Mein Virat and Sayi's fight will be a never ending commotion for Pakhi in the upcoming episode.

Virat will get to know that Sayi is all head strong as in for not willing to come to Chavhan house.

Pakhi on the other end is all ga ga over Sayi and Pakhi's mouth just does not stop pleading Sayi to come to Pune along with Virat.

Sayi will be seen so adamant that Virat will now take this situation directly over as an ego fight and end all conversations with Sayi.

The entire scenario will be drawn upon into the summery that Virat will hold upon Pakhi's hands and pull Patralekha to go to Pune leaving Sayi behind.

Virat's actions kill Sayi from within

In the upcoming episode of Ghum Hai Kisike Pyaar Mein Sayi will not be able to eye Virat holding on Pakhi's hand and taking Pakhi along.

It will be just unbearable for Sayi to eye Virat and Pakhi in the same frame but there will be nothing that Sayi will be able to do to stop Virat.

The story will hence pick up gear when Sayi and Virat will st up for a clear image conversation leading to revealing the entire facts about Savi and Vinayak.

Will Virat and Sayi get united post all the misunderstandings get cleared off?

Stay tuned with me to get some more exciting updates on Pakhi and Sayi's face to face revelation.

GHKKPM: Virat points gun at Jagtap! Past Comes Out

GHKKPM: Pakhi on death bed as detected by secret disease