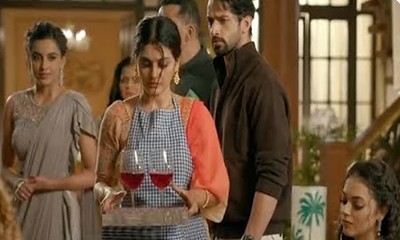 In the upcoming episode of Star Plus Imlie TV serial, the situations are going to get quite difficult for Imlie.

Rudra invites his foreign investors home as they want to learn more about Indian culture.

However, when they misunderstand Imlie as the maid of the house and Cheeni as Bahu,

Therefore, the situation worsens when Cheeni intentionally makes Imlie fall and thus when the wine falls on the investor's wife,

Here he shockingly insults Imlie and even calls him a useless maid.

And now this shocks Atharva to the core.

Cheeni surely thinks that she is impressing the investors and Imlie is getting insulted but nothing like this is going to happen.

Atharva is going to take a strong stand for Imlie and now let's see how Imlie will only impress the investors in the end.