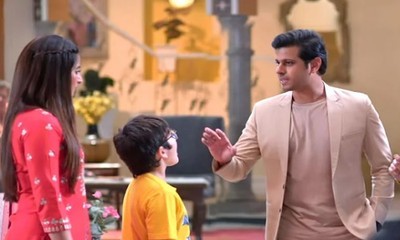 The latest storyline of Star Plus Ghum Hai Kisi Ke Pyaar Mein is all set to witness further a drastic confrontation between Virat and Pakhi.

Virat becomes adamant on his decision of getting Vinayak and Savi's admission in his childhood school which Sayi decided.

As Virat shows firm trust on Sayi's decision, now this badly pricks Pakhi because she doesn't want this to happen.

Therefore, she tries to separate Virat from Sayi and Savi as she asks the latter to leave Nagpur.

Pakhi surely tries her best to send Sayi and Savi away from Virat and Vinayak,

Unfortunately, her efforts backfire drastically when Virat overhears her conversation with Sayi.

Thus, a huge argument happens between Virat and Pakhi.

Moving on, you will now see Virat and Pakhi's drastic face-off wherein the former is really pissed off at how Pakhi crossed the line.

While Virat is not ready to accept Pakhi's conspiracies anymore,

Let's see what happens next in the show and how Pakhi handles the heartbreak when Virat decides to cut off with her and calls her heartless mother for trying to ruin Savi's life.