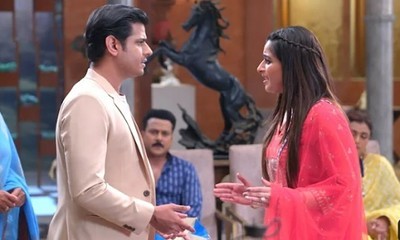 In the leading episodes of the Star Plus serial Ghum Hai Kisi Ke Pyaar Mein (GHKKPM), now you will see Pakhi’s position in the Chavan Niwas falling at stake.

Pakhi is taken aback at how Virat decided to get Vinayak’s admission to Savi’s school which is Virat’s old school.

So, here she takes a strong stand for Vinayak and refuses to agree with Virat.

However, even after Pakhi’s too much drama, Virat doesn’t give in and stays adamant about his decision because Sayi chose the school and he trusts her.

Interestingly, this confession of Virat is what shakes Pakhi from her feet and she raises her eyebrow at how Virat’s bond with Sayi has started to become stronger than before.

Therefore, she can’t take this anymore.

And now this is the reason why she meets Sayi secretly only to get her away from Virat.

Unfortunately, just when Pakhi compels Sayi to leave the city with Savi, here Virat hears everything.

And now shocking Pakhi, Virat unveils his hate for her which she just earned by trying to separate him from his daughter.

So, let’s see what happen next and what Pakhi will do now.