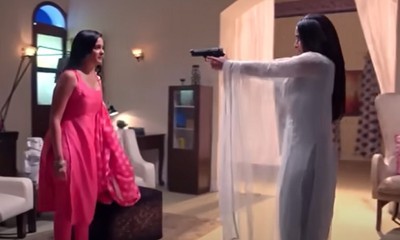 The upcoming biggest twist in Star Plus serial Ghum Hai Kisi Ke Pyaar Mein (GHKKPM), you will now get to see a major turning point and we don’t want you to miss it.

Recently, it was seen how Virat promises to Sayi that he will tell the truth to Patralekha.

Virat tries his best to tell the truth but he fails every time.

And now it’s time for the big turning point when Sayi and Pakhi come face to face over reality.

Pakhi is not ready to give away Vinu and thus she points gun at Sayi asking her to step back.

However, Sayi fearlessly confronts Pakhi and swears to not let her take away Vinu.

Thus, amid all this, when Pakhi points the gun on her head and blackmails to kill herself if Sayi steps forward,

Here Virat and Sayi both rush to stop Pakhi.

And shockingly, that’s when amid the fight, Pakhi ends up shooting at Sayi.

Sayi hospitalized, everything to change

Will Sayi die or will the outcome be worse?

Will Pakhi ever accept fate or snatch Vinu from Virat and Sayi?

GHKKPM: This Letter forces Patralekha to take Vinu away from Virat Sayi