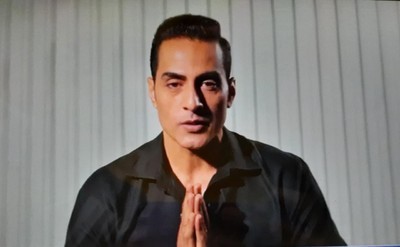 Star Plus's popular show Anupama's lead character's Sudhanshu Pandey who has played the role of Vanraj has made a heart-touching appeal to the viewers on camera.

He is associated with the big screen as well as acted with Hollywood actors like Jackie Chan and since the past year, he has been showcasing his acting skills through the serial Anupama which is widely appreciated by all.

This warm message goes out as a dedication and respect for the people associated with Indian Television who have entertained the public through every hurdle.

In the words of Sudhanshu "Just as Indian Film Industry is recognized with Awards, Indian Television also deserves a recognition that will also encourage and give the small screen actors motivation to give their best".

Sudhanshu is starting a movement #NationalAwardsForIndianTelivision with his well-wishers and requests support from the viewers and fans to assist him in the drive.

As rightly said by him, Be it pandemic or any downfall, Television has always strived to keep people entertained and pass through the tough times.

The artists definitely deserve this award for their selfless contribution to Indian Television.

Sudhanshu's sincere effort in making this movement is well appreciated and we hope his dream indeed comes true.