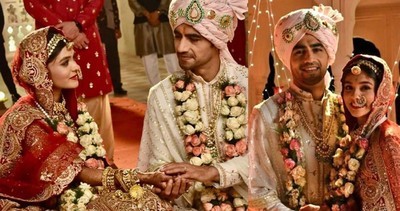 We hear that the producer of the show Rajan Shahi has splurged massive 1.5 crores for the wedding sequence.

Scroll below for more details!

As most known, Harshad plays the role of Dr Abhimanyu Birla while Pranali is Akshara Goenka.

After much wait, the couple finally got married in the show.

The wedding was no less than a royal fairy tale wedding that Katrina Kaif, Vicky Kaushal or Anushka Sharma, and Virat Kohli had.

Check out the price of Pranali Rathod aka Akshara's lehenga price

Many kept wondering about the destination for the royal affair and it was actually inspired by Priyanka Chopra & Nick Jonas’ wedding.

Talking about the budget, the show revealed “The show has a huge cast. Everyone was there for the sequence. If you take all the costs into consideration, it is close to Rs 1.5 crores and even higher.

In fact, Pranali Rathod wore a lehenga that was worth around 2.35 lakhs and it was studded with American diamonds.