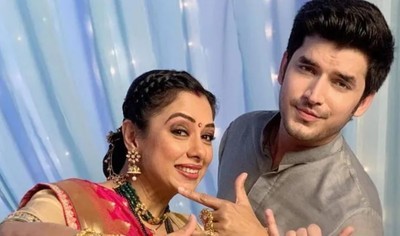 Anupama: Paras Kalnawat speaks about a new entry in the show and Anupama's wedding twist coming up

Star Plus's popular show Anupama is about to showcase some big twists in the wedding of Anuj and Anupama.

In a recent interaction with ETimes TV, Paras Kalnawat who plays the role of Samar expresses his views on Rupali Ganguly’s character getting married in the show. He also opened up about if there will be a new love interest for him or not.

Sharing his views on how his mother played by Rupali Ganguly getting married on the show to Anuj.

He said, “The children are portrayed to be very supportive about their mother getting remarried and I feel that is one of the most progressive tracks in the show. We are all looking forward to the real wedding because the sangeet and mehndi tracks are done now. I feel it is a high point in the show and am happy with my role.”

Paras revealed about his new love interest in show

Anupama: Should Anuj Anupama perform court marriage? The up...

Anupama: New Chapter opens up for Anuj Anupama In the intri...

Anupama: NO more delay to the wedding track, Bapuji makes his last wish