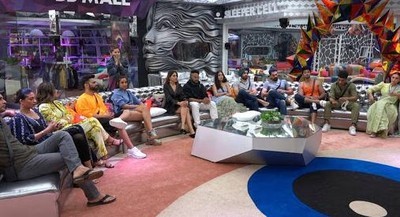 Colors most popular Reality Show Bigg Boss 14 will showcase interesting drama in the episodes to come.

It was earlier seen that housemates were fighting for immunity task where they had to decorate the farm to win the immunity.

Two teams were made where unfortunately team with Jasmin Bhasin Abhinav Shukla Rubina Dilaik Jaan Kumar Sanu Shehzad Deol lost the immunity task round and are at elimination risk.

This elimination will be done on the basis of votes by live audience.

Nikki Tamboli was the Sanchalak who made the decision and declared Pavitra Punia’s team as winner including Eijaz Khan, Rahul Vaidya, Shehzad Deol and Nishant Malkhani.