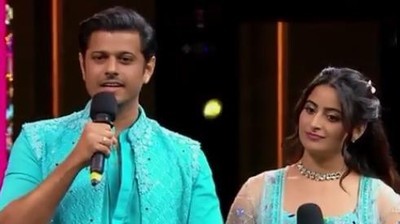 Star Plus upcoming Reality Show Smart Jodi is introducing various couples to keep the loyal viewers attracted to the show and spice up the drama quotient.

Neil Bhatt and Aishwarya Sharma were the second Jodi where Ayesha Singh had introduced and promoted the couple for the Reality Show.

Now the channel has released the second promo where Neil Bhatt and Aishwarya Sharma have seen opening about the death trolls Aishwarya is getting from internet where there are people who hate her to the core.

They hate her so much that they want her to die due to Corona.

Aishwarya Sharma shows that she is not affected with such bad comments but at some point of time she feels hurt as she is just doing her job in the show.

Neil Bhatt and Aishwarya Sharma are currently seen in Star Plus popular serial Ghum Hai Kisi Ke Pyaar Mein as Virat and Pakhi were fan followers of the show hate Pakhi for turning the negative lead in Virat and Sayi's love story.

Let's see what happens next in the Reality Show and stay tuned with us for more updates on Star Plus Smart Jodi.