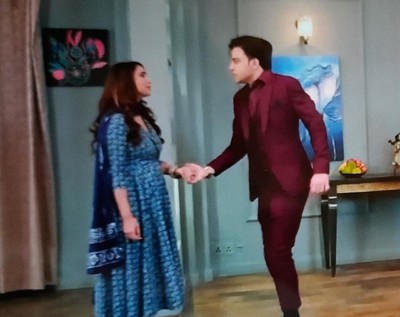 Zee TV's Kumkum Bhagya is up with exciting drama and twists as Ranbir and Prachi break up.

Rhea gets a video of Sid and Prachi at a cafe and exaggerates it to instigate Ranbir.

She creates a huge ruckus and sheds tears portraying herself as a victim.

Much more, she attempts murder when Ranbir saves her and she plays an emotional drama.

She expresses her insecurity as she has no family of her own and she will be questioned by society.

Further, Pallavi too joins her in the drama, and both manipulate Ranbir to marry Rhea.

With much reluctance, to stop Rhea from suicide, Ranbir proposes her marriage.

This is a dream come true for Rhea and she readily accepts his proposal.

Meanwhile, Sid tries to support Prachi emotionally and make her strong to fight back.

Sid assures her that they would together find out the truth and expose the guilty.

Now it will be interesting to see what will happen when Prachi gets the news of Ranbir's marriage with Rhea.