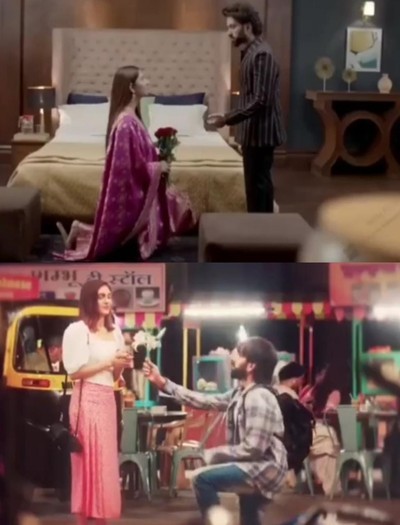 Sony TV's most popular show Bade Achhe Lagte Hai2 has released a new promo that has left the audience awestruck.

As per the ongoing track, Vedhika is trying hard to bring the truth about her and Ram's affair before Priya.

Finally, at a party, Vedhika shows Priya Ram's video going on knees and proposing to her.

Vedhika smirks now that she is sure Priya will break her relation with Ram.

Priya however does the unthinkable and recreates Ram's proposal style with her unique style.

Priya gets a bunch of roses and goes down on her knees before Ram.

Ram confesses the truth to Priya

Seeing Priya like this leaves Ram stunned when she questions him if he had never done anything like this when he was young.

This leaves Ram dumbstruck as he realizes maybe Priya is aware of his past with Vedhika.

Moreover, Ram feels guilty and confesses his relation with Vedhika.

Now it will be highly interesting how will Priya react to Ram's confession.

Will Priya let it go and move ahead in her relation with Ram?

Let us wait and watch what will happen further on the show.

Bade Achhe Lagte Hai2: OMG! This is what Shubham did to Priya in a drunken state